Getting Outside for Peace of Mind with Harrow Carers

A lot of us never give a second thought to the time we spend outdoors. We recognise and reap the benefits – the fresh air, the peace and quiet – but how often do we really stop and think about the ways our outdoor activities give us the space to process our thoughts, and the energy to get through the busyness of modern life?

At Rohan we believe that everyone should have the opportunity to enjoy the great outdoors. Through our Gift Your Gear initiative we collect donations of useable outdoor kit and distribute these to meaningful causes across the UK, because how can you truly experience all that the outdoors has to offer if you don’t have access to the right kit?

Colin Powell, Operations Director at independent charity Harrow Carers, couldn’t agree more. He wants to bring the “real happiness” that he’s experienced on his own expeditions, walks and camping trips to the unpaid carers he works with. Colin talked to me about the support, training and advice that Harrow Carers provides for unpaid carers; why camping and other outdoor experiences are so vital when it comes to mental wellbeing, and how donations from Rohan’s Gift Your Gear initiative are going to help.

What is an unpaid carer?
An unpaid carer is anyone who looks after someone who cannot cope without support. Since 1997, Harrow Carers has worked to assist and alleviate the challenges faced by young (age 5 – 17) and adult unpaid carers. Their work takes many forms, from employment support and mindfulness workshops, to counselling sessions run by certified members of the British Association for Counsellors and Psychotherapists (BACP). Most recently, they have taken over the lease of a 3.5 acre field, ready to run BBQ, bush craft and camping experiences.

Getting outdoors
These outdoor activities will add to the vast array of wellbeing support already offered by Harrow Carers. Camping, campfires and learning basic survival skills together will encourage the carers to take time for themselves, without pushing them too far. Staying close to home is important to a lot of carers, so Colin hopes that the field being nearby will give them the security to relax and enjoy themselves, safe in the knowledge that home isn’t far away.

Harrow Carers recognise that many carers really suffer in their role, and may become patients themselves if they’re not properly supported. Colin tells me that if he had to pick one thing for everyone to know about what it’s like to be an unpaid carer, it would be the psychological difficulties they face. Carers regularly put aside their own needs in order to prioritise the welfare of the people they care for, which is why the wellbeing support offered by Harrow Carers is so important.

By engaging in the outdoor events that Colin is planning, young and adult carers will have the opportunity to engage in experiences they might never have tried before.  At the same time, they’re discovering new skills, building their confidence and harnessing what Colin sees as the most essential characteristic to encourage in a carer - resilience. 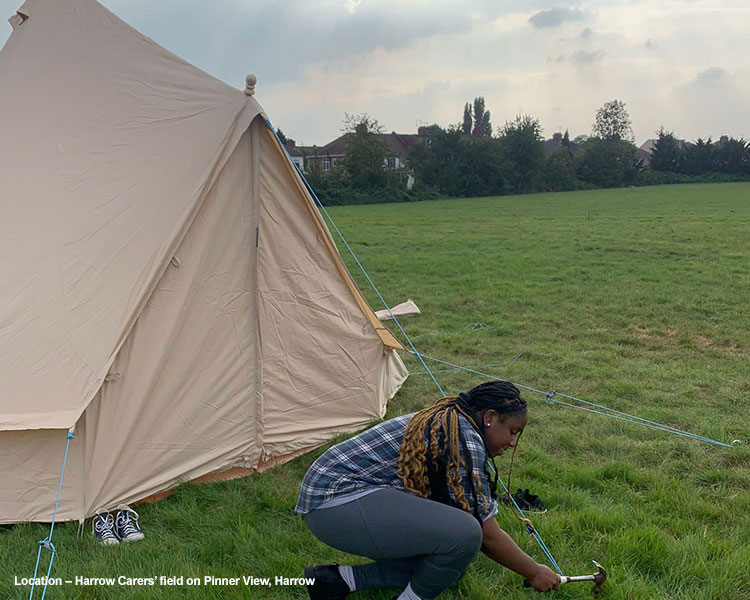 Tailoring the experience
Harrow Carers’ outdoor activities are tailored to be exactly what their carers need. Colin listens to feedback and requests from participants to make sure the events he plans provide the perfect mix of support, fun and a much-needed break. For example, a group of young carers recently requested for their first stay at the new field to be a girls only trip. So, at the beginning of September 2021, Colin organised Harrow Carers’ first girls camping weekend, giving the group a budget to stick to and the freedom to plan their own activities.

The weekend was a huge success, so much so that the next one is already being planned, along with a bigger adventure to Snowdon next year. The young carers put up their own tents, watched a film, and enjoyed pizza and marshmallows around a campfire, having such a great time they’ve asked to share the experience and organise a similar weekend for their older siblings, who are young adult carers.

Through our Gift Your Gear initiative, we worked with Harrow Carers to make sure their young carers had all the right kit for their weekend. The boxes of donated kit they received means there will always be useable outdoor kit for the carers to use, whether they’re camping in Harrow or taking a trip further afield.

Making support accessible
As the name suggests, unpaid carers don’t earn a wage from the sometimes fulltime care that they give. Harrow Carers regularly hear from people who have had to reduce their working hours, or even give up paid work entirely, to provide care, which is why the majority of their services are free. Donations of useable outdoor kit from Rohan’s Gift Your Gear initiative will ensure that, just like the services run by Harrow Carers, the outdoors is also accessible to as many unpaid carers as possible.

We’re collecting donations of useable outdoor kit for our Gift Your Gear initiative until the 21st November. Simply gather your kit and take it to any of our Rohan stores, or request a free returns label online here. Your pre-loved kit goes a long way in supporting fantastic causes like Harrow Carers and, as a thank you, you’ll receive 15% off^ your next full-price Rohan purchase when you donate.

If you want to find out more about Harrow Carers, have a look through their website. You can get involved with the incredible work they do by fundraising, donating or volunteering.

Visit the Gift Your Gear page on our website for more information about how to get involved with this initiative, and for more stories from the organisations we support, visit our Explore page.

^The Gift your Gear 15% off offer will be valid against a full-price purchase once you have made a qualifying Gift Your Gear kit donation either instore or online. This discount code can only be used for a single transaction and is not based on the number of items donated. The 15% offer ends on 21st November 2021. The discount may not be used against a previous purchase, to buy gift cards or in conjunction with any other offers. Postage donations are to be returned to Rohan by 30th November 2021. Free returns postage is for UK mainland donations only. Size and weight restrictions apply when donating online