The West Country is littered with a list of inspiring artists who produce dramatic and evocative work. Today we catch up with the Falmouth-based artist John Dyer and long-standing Rohan ambassador, who has one of the most recognisable styles of any modern painter, so much so that he has been featured in school curriculums around the world.

John's passion for bringing into focus the natural world, the people, plants and animals which are in many cases under severe threat in remote and beautiful parts of the world whilst engaging both the younger generation and adults in a conversation that affects us all is nothing less than inspiring.

‘Last Chance to Paint’ has inspired countless children and adults to become aware of the natural world’s beauty through art and music. Today we talk to John about what inspired the project and, not least, his trusty Rohan painting shirt, which accompanied him on his trip to the Amazon 20 years ago and is still in use today. 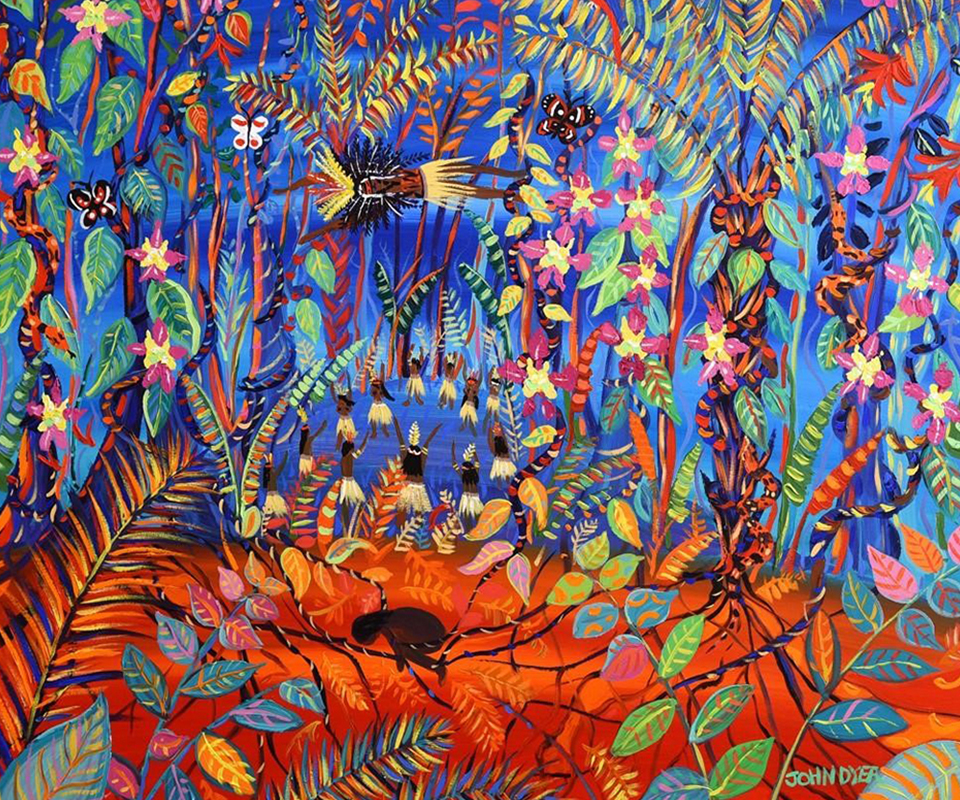 The sheer magic captured in John’s paintings engages both adults and the younger generation in a conversation about the beauty and fragility of the world around us.

John started his career in 1989 with a degree in London, studying painting, design and photography – following in the footsteps of his artist father. He loved university life, saying with a smile: “I was kind of doing a bit of everything, broadly ignoring what I was asked to do, and broadly making the most of having three years to indulge everything I wanted to do.”

Fast-forward to 2018, and John had just finished setting up ‘Last Chance to Paint’, a non-profit organisation designed to help children engage with the environment through art and music. The Born Free Foundation are the main working partner, who have helped John truly bring his vision to life, with support from the Eden Project (where he’s been an artist in residence for over 20 years).

John chose Rohan as his clothing partner, and when we asked him why, he revealed that Rohan supported his original Amazon expedition way back in 1989 – kitting out the entire team for the adventure. He still uses his Amazon expedition shirt to this day – it’s now his trusty painting shirt!

“I fell in love with Rohan clothes, because they’re just so super practical, comfortable and they just work."

We were curious to learn more about how ‘Last Chance to Paint’ came into being, and John kindly shared the organisation’s origin story with us. It all started when he turned 50 in 2018, he was given a large retrospective public exhibition in Cornwall. The exhibition was a wonderful celebration of his work which spanned 30 years of his life.

“Thanks to my pool of contacts, I suddenly realised because of my age I knew a lot of really amazing people, and in my little tiny way could make things happen – and that’s how ‘Last Chance to Paint’ was essentially born.”

When asked about the ethos of the project, John continued: “Art for me has been a huge journey and learning experience. I’d start by painting something like a plant just because it looked cool – usually because it had a great colour or great shape or form. But then, you know, by the end of the day painting with the horticulturist, or the botanist or the scientists, I learnt why it’s growing and what it does. And that’s far more interesting, and the process of painting gets you to learn that.”

“Some people actually say there should be a question mark after the word ‘Chance’. I didn’t add the question mark because it will be the last chance to paint each subject unless something changes.

It might not be this year, but it will happen – maybe in the next 20 years or 50 years – unless people make a change in their own personal behaviour.”

So far, projects the team have worked on include a visit to the Yawanawá tribe deep in the Amazon rainforest and a trip to Borneo to meet the Penan tribe and the endangered orangutans. Their latest project will focus on the Maasai tribe in Africa. While currently paused due to the pandemic, this collaboration with Born Free is something John is itching to start.

It’s trips like this that help John inspire children all over the world. He passionately believes that you don’t have to be in the Amazon rainforest to create art that connects you to the environment, or the people, plants and animals within it. As long as you take the time to learn about why you’re painting the animal, or understand more about the situation the animal is in, then your painting will take on more meaning and instantly feel more personal. 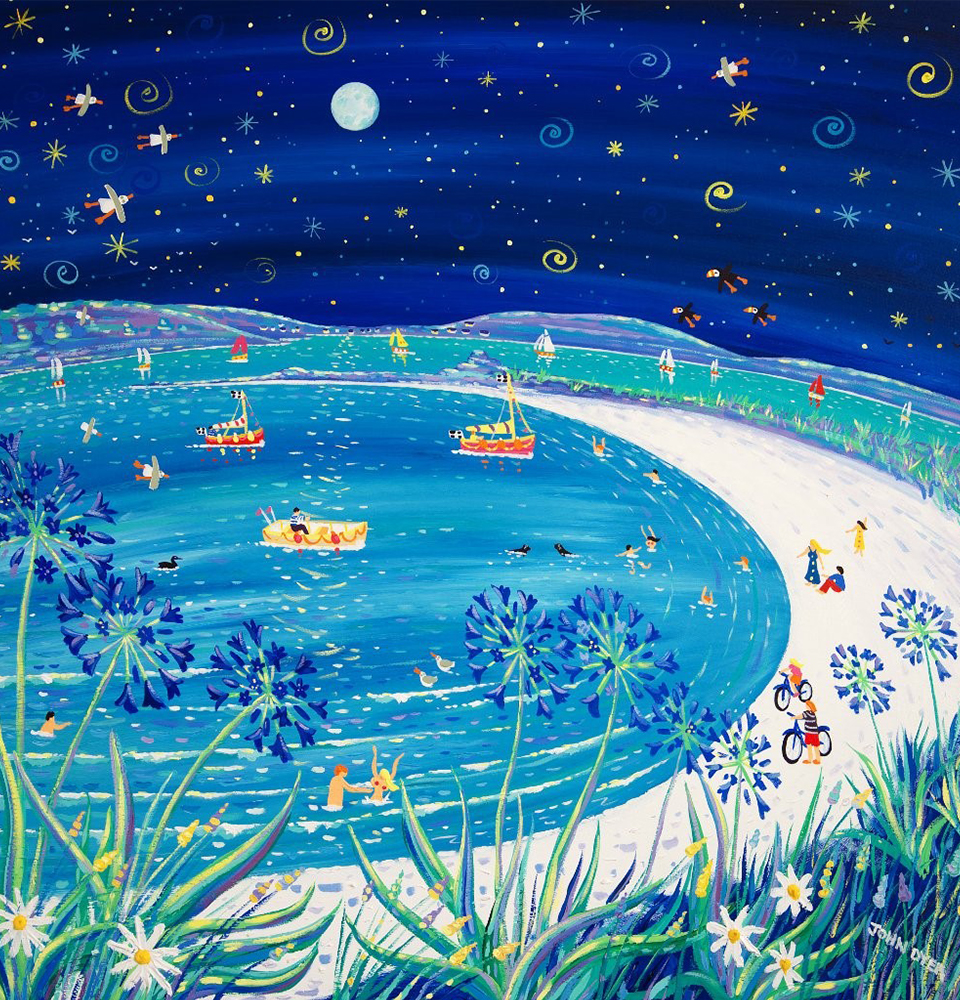 Bringing life into the classroom

It’s the reason why ‘Last Chance to Paint’ has had such a positive response from classrooms all around the globe. Schoolchildren are learning about the environment, tribal culture and climate change through art under the guidance of John’s lessons.

How does it work? With help from the Born Free Foundation, John and the team record videos live from their current location. These are sent via satellite to schools, and children are then able to send questions directly to the team through the ‘Last Chance to Paint’ website. Completely free to access, children can ask the team absolutely anything – they can even ask John about his weird lunch if they’d like – and they’ll receive unedited, unscripted answers back.

As a result, change is starting to happen. Teachers and children all over the world tell him that his lessons have sparked action, be it through children planting new trees to improve the school’s carbon footprint, having meat-free meals at lunchtime or building insect houses in the school fields.

Looking towards the future

The future is certainly looking bright for ‘Last Chance to Paint’. Even during the pandemic, John and the team are encouraging children to connect with their environment. Entries to the organisation’s World Gallery are still being accepted – it’s an online space designed to exhibit the work of youngsters.

Their mission seems even more important now than ever before. Asking John what’s next after his trip to Africa, he excitedly reveals that they’re turning their sights towards the Arctic, and orcas.

John’s refreshing approach to tackling serious subjects with creativity, helps people to feel inspired, rather than guilty, about their impact on the environment.

We wish John and his team the greatest success in the future – and we hope we can continue to kit out his future expeditions!

If you’ve been inspired by John and the ‘Last Chance to Paint’ team, find out how you can make a difference here