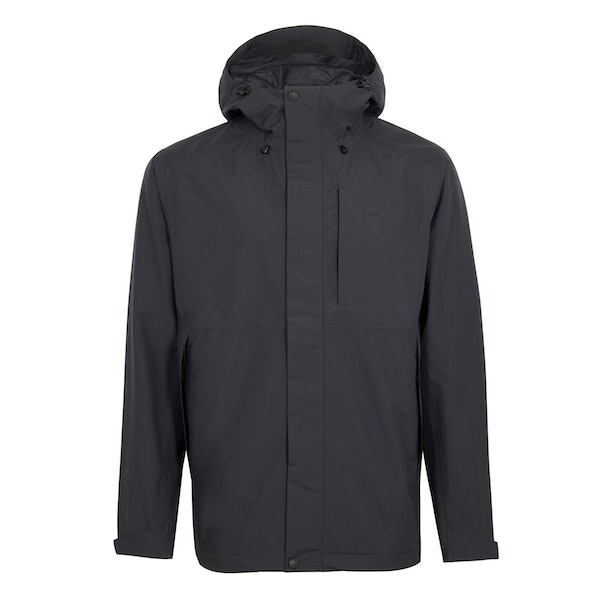 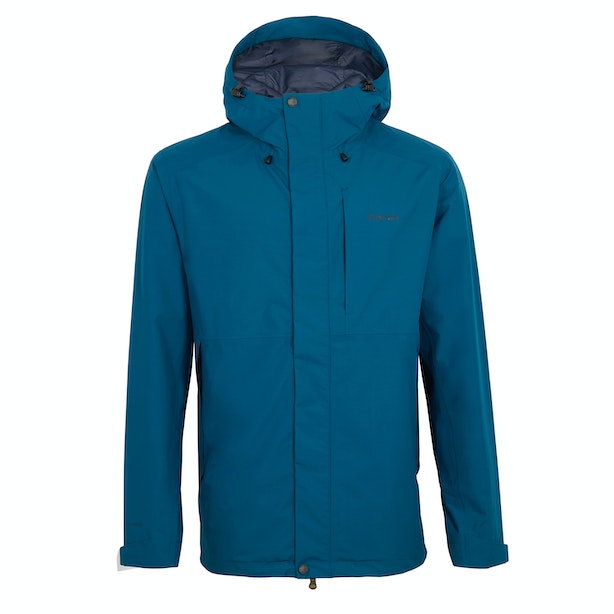 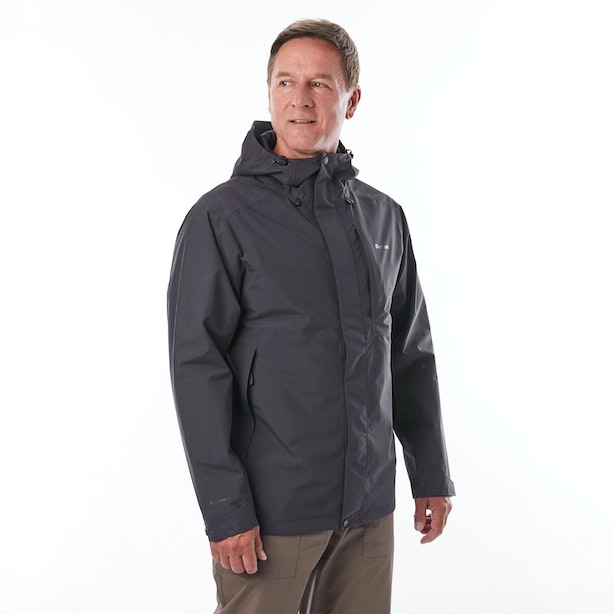 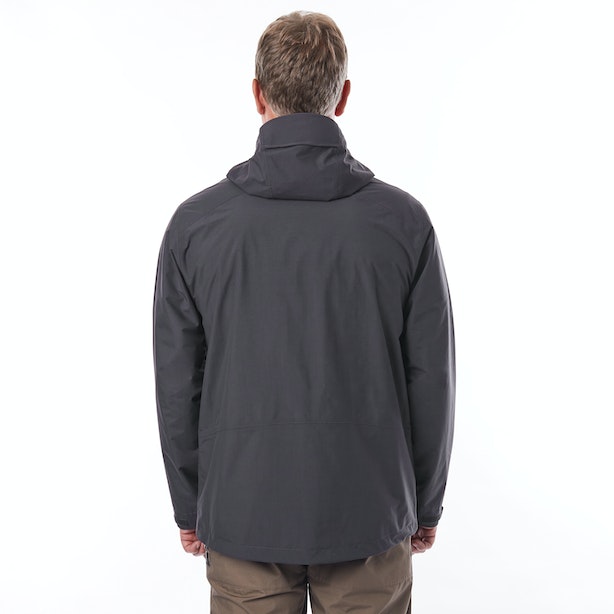 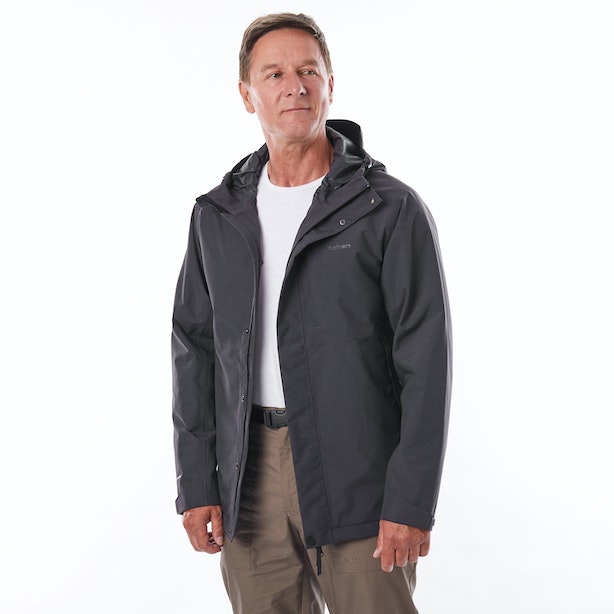 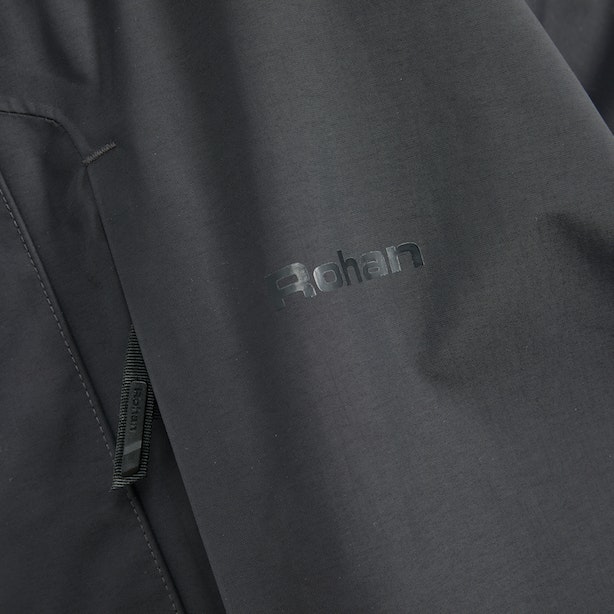 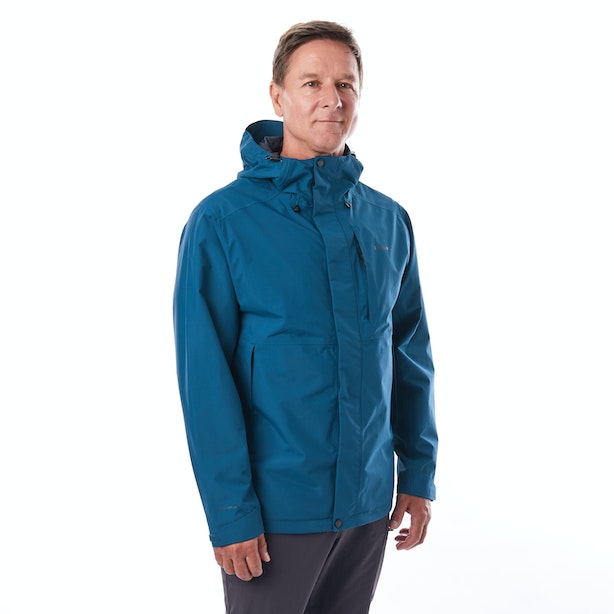 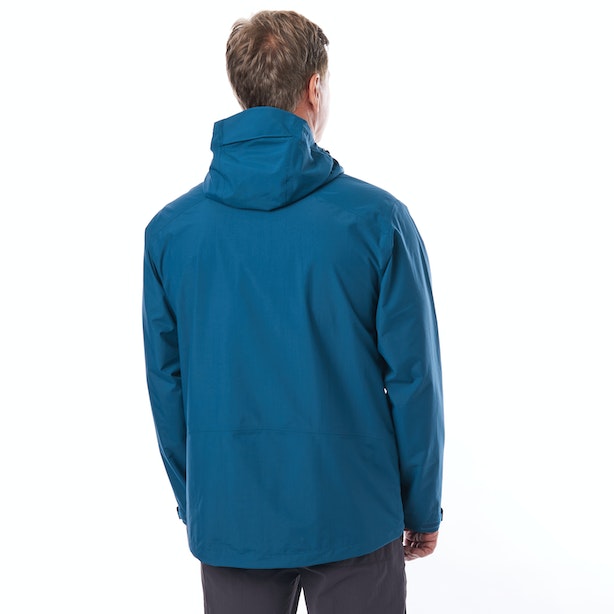 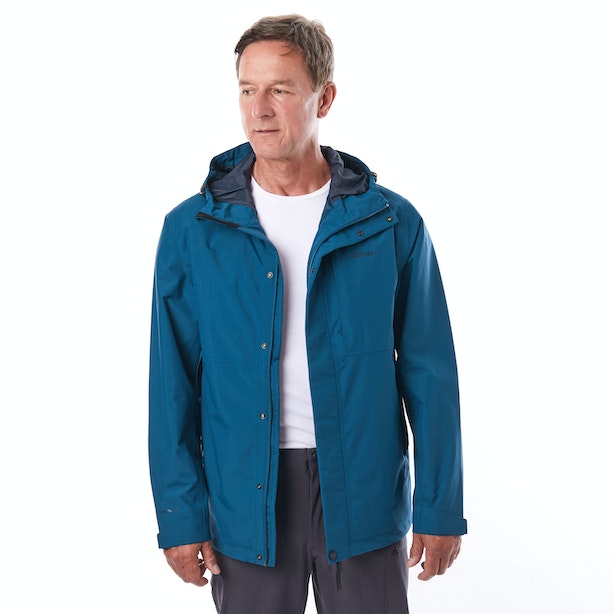 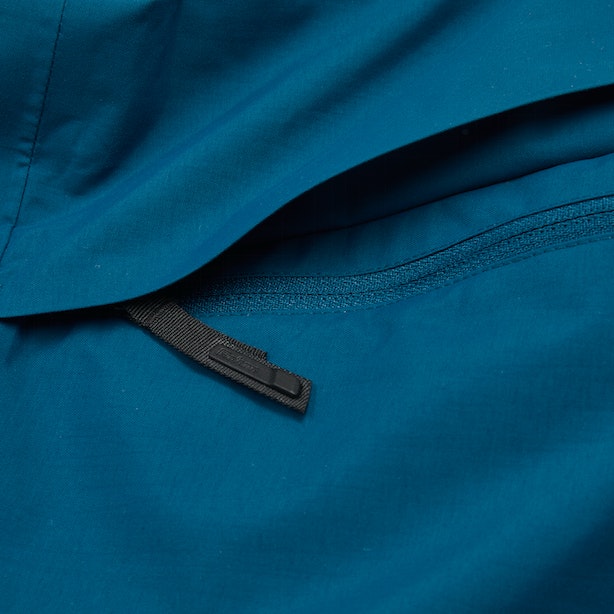 The Men’s Brecon Jacket is a classic all season shell that provides complete protection from the elements and is perfect for layering over a base layer and/or fleece for extra warmth, worn with large protective gloves. Great for when you're exploring the hills or further afield, making it a perfect addition to your wardrobe.

The hem and cuffs provide you with the flexibility to fine-tune the fit to your preference so that you can continue your activities as comfortable as possible.  Large functional pockets are designed to be worn with a rucksack and won't interfere when you're reaching for your OS map.

So, whether you're taking on the mountains or slower-paced walks, the weather plays a big part in our outdoor adventures. This is why the Brecon Jacket comes with our renowned Barricade Standard, which combines our latest fabric technology for being waterproof, windproof and breathable. Our innovative 2-Layer Barricade Standard uses technology to bond the outer fabric with the internal breathable membrane, then lined with taffeta and mesh for your added comfort.

For our garments to be classed as reaching the Barricade Standard the fabric must achieve a minimum Hydrostatic Head of 20,000mm. Hydrostatic Head is a fabric measurement way of measuring how waterproof a garment is. The fabric is held tightly in place and water is then exerted at a high pressure until the fabric starts to bead with water. The higher the count the more waterproof the garment is.

The jacket is treated with a DWR finish which boosts the fabric's water repellency. In addition, it forces water droplets to bead up and run off the outside of the fabric, maintaining its effectiveness.

Low pack size is a benefit whether you’re packing for a day’s walking or for the trip of a lifetime. We continually scrutinise fabric specification and garment construction to minimise the packed size of our clothing. The actual pack size is tested and listed.

All Rohan clothing is designed to be very fast drying – as much a benefit for unexpected downpours as anything else. It’s easy to wash and often needs no ironing. Almost all garments will dry overnight, meaning you can take less with you. We test every item and list its drying time.

Our DWR finish is an advanced treatment which dramatically increases the water repellency of our fabrics. On its own, it offers a useful level of shower resistance; used in conjunction with our Barricade technology, it reduces the tendency of the face fabric to wet out and maximizes breathability.

Losing the odd bit or bob when you’re close to home is rarely an issue, but losing car hire keys, passport, phone or wallet becomes more important than ever in a far off land. That’s why lots of thought goes into safer pockets – deeper, zipped and hidden.

The Barricade standard gives you reassurance of a high level of waterproof protection. All of our waterproofs must meet our Barricade Standard to be ten times the British standard for waterproofing.

The waterproof fabric of the garment has two layers. The water-repellent outer fabric and the PU hydrophilic membrane are bonded together. In addition, a loose lining protects the membrane from the inside.

Features at a Glance+
Technologies+

Our DWR finish is an advanced treatment which dramatically increases the water repellency of our fabrics. On its own, it offers a useful level of shower resistance; used in conjunction with our Barricade technology, it reduces the tendency of the face fabric to wet out and maximizes breathability.

Losing the odd bit or bob when you’re close to home is rarely an issue, but losing car hire keys, passport, phone or wallet becomes more important than ever in a far off land. That’s why lots of thought goes into safer pockets – deeper, zipped and hidden.

The Barricade standard gives you reassurance of a high level of waterproof protection. All of our waterproofs must meet our Barricade Standard to be ten times the British standard for waterproofing.

The waterproof fabric of the garment has two layers. The water-repellent outer fabric and the PU hydrophilic membrane are bonded together. In addition, a loose lining protects the membrane from the inside. 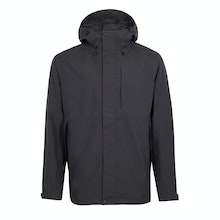 What People are Saying

I got this jacket to replace a Rohan Atlas jacket that has seen better days, and it joins a wardrobe of many Rohan coats used from mountain walking to funerals!! This coat is a super fit and, unlike my Atlas, the shape does not distort with my mobile phone in the chest pocket. The coat is wonderfully light too. My only comment/complaint for the design team to consider - why does the, excellent and very functional, hood not roll up and store into a collar as it has on my many previous coats; this type of jacket is much neater looking with a hidden hood. The only previous Rohan coat I have without a "hidden hood" is a "Hideout", whose design doesn't suit a collar. That aside, a truly fabulous coat

Great length, no leaks. Wind proof just perfect for me during a windy and very wet recent visit to Western Super Mare..

Needed a new Waterproof Jacket and after checking out several makes opted for the Rohan Brecon. Arrived early this morning so couldn’t wait to try it out. First off let me say everything about this Jacket is right I’m 6ft 3’ with 40.5 chest I choose medium and it’s a perfect fit, good sleeve length for my long arms perfect around the body and spot on length wise. Manufacturing Quality is outstanding as you would expect from Rohan with big pockets in all the right places. For me the best thing about this Jacket is the beautifully designed hood and it’s adjustability it’s a work of art a thing of beauty no less. Hoods are important in torrential rain and the hood on the Brecon has clearly been thought out properly, well done Rohan design team.

A dry day today but can’t wait for some rain, obviously I can’t comment on the Brecons waterproofing yet but from past experience with Rohan waterproofs I’m not worried at all they don’t let you down. A quality bit of kit which should last a long time.

Needing a new waterproof, I called at my local Rohan store intending to buy the Ventus jacket. As it happened, my size and preferred colour was out of stock. I tried a larger size to get an idea of how it looked, then the Brecon jacket for size.

The sizing of the latter was perfect and I immediately knew it was going to fit the bill - not only did it benefit from Rohan's 'Barricade' technology, but it also had four large pockets. The hand pockets are so capacious that they also accommodate one's forearms. There are two other pockets, useful for storing a mobile phone, and in my case, a football programme. Not only that - it was cheaper than the Ventus.

An added advantage of this lightweight waterproof is that it is an effective outer layer when teamed with, for example, a microgrid fleece of the Radiant Merino jacket.

I have a substantial wardrobe of Rohan products and I already know that the Brecon jacket is going to be amongst my all-time favourites.

Overall a good jacket. However the flaps protecting the hand pockets are inadequate. They do not cover the zips unless held in place by a rucksack belt. Otherwise the zips are exposed to the elements. I would have given the jacket 5 stars if not for this.

I would not recommend this jacket. The Ridge jacket does not have this problem.

Thank you for your review. Our Brecon Jacket has been wear tested to make sure the garment performs perfectly for the intended end use and the pockets have been placed for easy access. Our Design team have confirmed that the zips are covered by the flaps and when the jacket is worn in wet weather, the rain will bead up and roll off the jacket. This has been a really popular style in our range however, you are welcome to contact Customer Service if you would like to discuss alternative styles.

This jacket is typical Rohan quality and I'm generally pleased with it - but beware the badly designed hood. Rohan wired hoods have been the best I've ever used on any waterproof until this jacket - for some strange reason instead of the peak having wire on the front the wire is at the back of the peak so the wire is actually on your forehead which makes the peak come down onto your forehead and rain runs off it onto your face. A great jacket ruined by a badly designed hood - not like Rohan at all.

Thank you for your review. Delighted to hear you have been pleased with this style. The wire has been positioned so the rain can channel off down the side of the face. You may wish to use the two point hood adjustments to help position the hood more suitably for yourself. This is a new style in our range which is proving to be really popular with our customers so we hope you will enjoy wearing your Brecon Jacket.

Works even better with 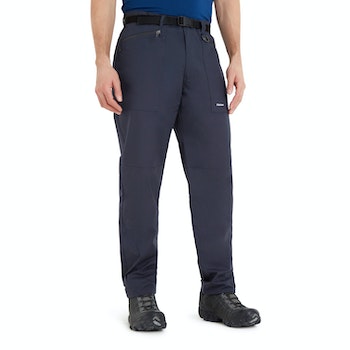 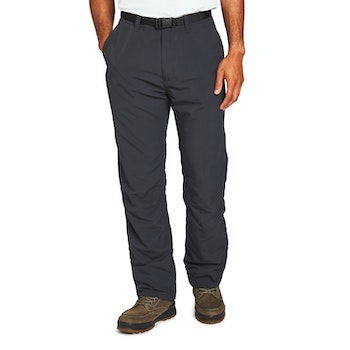 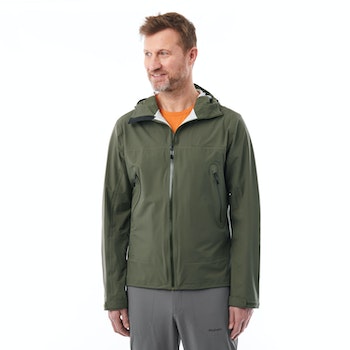 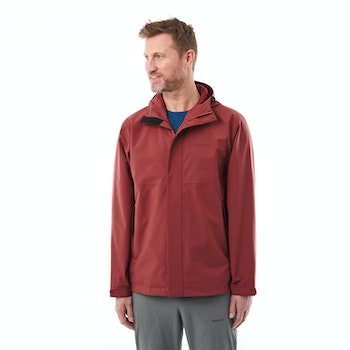 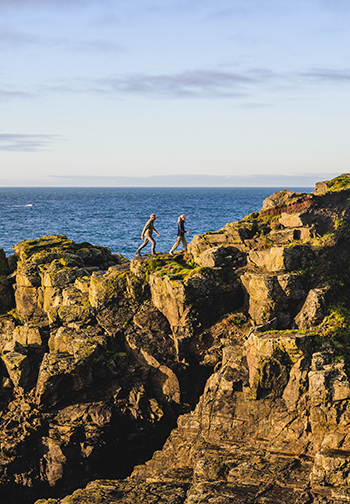