We left a frosty Canberra on 2 May in our Landcruiser with slide-on camper and headed for the other side of Australia. Our first stop was Mungo National Park, home to early inhabitants 45-30,000 years ago.

In this era the lake supported a diverse marsupial fauna and lush vegetation - very different from today's sandy desert. From Mungo we drove on to the geologically diverse and spectacular Flinders Ranges National Park and then northwards along the Oodnadatta track, passing to the west of Lake Eyre. The country was covered with saltbush, the bitumen was long gone. We camped at Coward Springs, previously a station on the old Ghan railway. Further on at Dalhousie Springs on the western fringe of the Simpson Desert  we spent an energetic five days with Friends of the Simpson Desert. There, under the friendly guidance of park rangers we dug holes with crow bars, painted bollards, weeded and helped install new steel steps into the large pool fed by a hot spring. We enjoyed our late afternoon spas!

By 24 May we were in Alice Springs basking in mid-20s temperatures: shopping, fixing things, and getting haircuts. We drove on to beautiful Palm Valley in the Fincke Gorge National Park for some walking before driving south along the Boggy Hole 4WD track that follows the course of the Fincke River.

In the past this picturesque route had been a major route used by Aboriginies, missionaries and early settlers.

We moved on to Kings Canyon, Mt Conner, Uluru and Kata Tjuta.

From 7 June we were out of mobile phone range for 3 weeks as we travelled westwards via the Great Central Road and the Heather and Gary Highways across the Gibson Desert. These so-called "highways" are narrow, highly corrugated tracks dotted with frequent washouts: driving is hard work! The Gibson Desert is red stony country with spinifex, mulga, and a beautiful red-flowering Holly-leaved Grevillea. After several days of hard dusty driving, we arrived at Canning Stock Route (CSR). Our progress became even slower, around 100 km a day, as we negotiated horrendous corrugations, sand dunes and rocky outcrops. The weather was excellent, warm and dry. The country was very beautiful and the changing flora, fascinating.

After 2 weeks we left the CSR on 24 June and drove northwards to the remote Karlamilyi National Park. For 4 peaceful days we, walked, botanised and gathered the abundant solar input to maintain our fridges. Then we headed on via Marble Bar and Newman. Marble Bar boasts being the hottest town in Australia but fortunately it was Winter and only 20 degrees.

We visited some beautiful National Parks in Western Australia (WA). Karijini is the largest and it is simply stunning.

We explored tracks into the steep-sided gorges of deep-red, banded, iron-rich rocks and some shockingly cold waterholes. From here we drove on via Tom Price (where we had our windscreen replaced after a stone thrown up by a fast car on a dirt road started spreading cracks) to Mount Augustus and Kennedy Range National Parks. By now we were learning names of some of the many lovely and colourful wild flowers of the Pilbara. One day we heard a report that it was going to rain - we had barely had a drop for two months - and, rather than become trapped by road closures due to flooding, on 12 July we left and headed for the bitumen and the coast of WA, a journey of around 10,000 km in all.

Clothing: My Rohan Roamers were indispensable as they suited a wide range of activities as well as climate and washed and dried so very easily. A close second were my Troggings that kept me warm in the cold desert nights.

The single item I wished I had taken along was my Microgrid Stowaway Jacket – as a lightweight, easy-to-pack extra layer for the many times when lighter insulation was all that was needed.

The one ‘not so good’ thing that happened: As we were setting up camp after a day driving along a particularly rough track through the desert, I opened the back of our camper to find a flood right through the lower compartment. It looked like the tide had come in!  We soon realised our 80 litre drinking water tank had been holed and 50% of our supply was sloshing around the various bits of equipment packed there. Our travelling companions rushed in to help bail out the liquid into containers. Water is precious in the desert and after an hour or so we managed to conserve most of it – at least we could all use it for washing! Our friends shared their clean drinking water with us.

The highlight: This was indeed the trip of a lifetime with so many highlights it is difficult  to select the best.  I was especially fascinated by the wildflowers and tried to photograph all I could find. Since returning home, I have identified and compiled a photographic record of over 150 species from our trip. 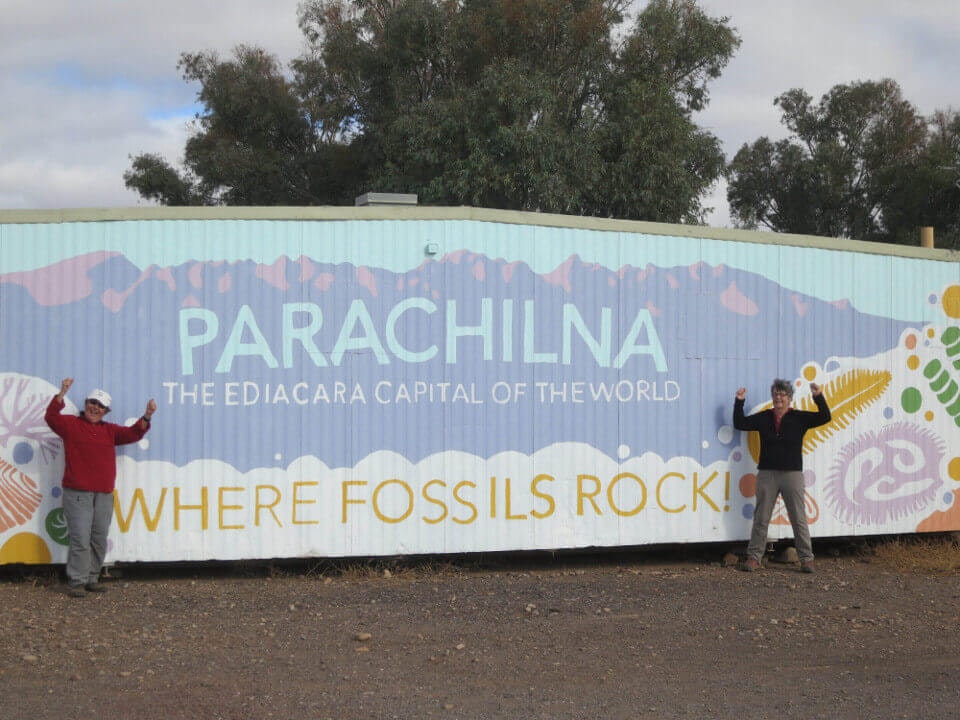