Last summer I joined an Austrian Alpine Club “Seniors” hut-to-hut tour in the Austrian Ötztal Alps together with 6 other mountaineering “oldies” – all OAP’s with me at age 73 being the oldest. The strenuous tour involved a circuit of the highest huts in the region crossing huge glacier networks and taking in a number of high peaks, culminating in an ascent of the Wild Spitz.

We stayed at Austrian and German Alpine Club huts where the most spectacular hut was the Brandenberger Haus (3,274m) overlooking the glacier from an astonishing position high on a rocky spur.

The highlight of our trip was the ascent of the Wild Spitz, which involved a very early start followed by 2 hours climb up a steep valley then a further hour or so climbing steep frozen snowfields and ice.

Rock scrambling is tricky in crampons to gain access to the edge of the Wild Spitz glacier. Thereafter we roped-up to ascend the glacier weaving our way around some large crevasse systems with the final climb up to the Wild Spitz summit via a very steep and exposed rocky spur. As always when one completes a challenging climb like this one’s thoughts then need to be directed to the long glacier descent, navigation through complex glacier fields and the walk-out down to the next mountain hut and bearing in mind that many mountain accidents occur in descent when one is tired, relaxed and careless it is important to be vigilant and focussed on descent because the climb is only really over when one is safely in the hut.

The best garment in my rucksack being my Rohan Icepack jacket which allows me to quickly and easily regulate clothing layers whilst carrying the very minimum weight. Weight reduction is very important, since it is hard to keep the total rucksack weight for these trips below 14kg because of the climbing gear needed for high alpine conditions and this is where the Rohan Icepack jacket scores as it only weighs 406gm with stuff sack.

What should I have brought with me but didn’t? – well I had assumed that the best option for the trip would be my cut-off mountain trousers, but in fact on this long day involving about 10 hours on glaciers I found my legs rather cold and I should have invested in some Rohan full-length trousers that would have kept me warmer.

The only downside of this amazing day was that as an older party we were moving relatively slowly and for such an ambitious route we were on our feet for about 14 hours that day, which on reflection was perhaps too long a day for us mountaineering “oldies”. 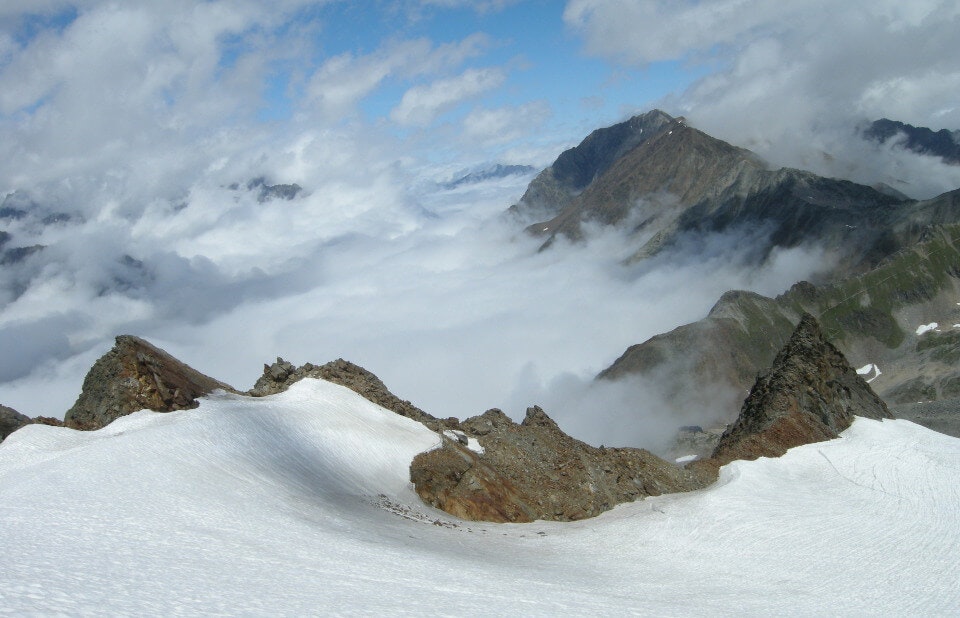