Late October in Greece last year; whilst some might be thinking of catching some last minute sunshine on the islands, I wanted something a bit more challenging, so I headed north from Athens and delved into the interior. Pre-trip planning had been minimal, but I had managed a map or two and the names of 3 mountains I wanted to climb, all in very different parts of the country, this is the first one.

I jumped into the hire car at the airport, punched in my best guess on the GPS, and realised Greece is a lot bigger than I thought it was! The first mountain on the list was Gamila, the highest peak of the Tymfi massif in the Pindus mountain range, near the border of Albania and over 8 hours drive away. Fuelled by various forms of baklava and some seriously salty cheese I negotiated the road network and the Grecian driving ‘idiosyncrasies’ and arrived at my destination as the sun set, shining a soft pink glow onto the cliffs above the village and making the rock face appear as if it was made of rose granite.

Tymfi looms over the top of the upper reaches of the Vikos gorge and it is 4 miles and 3000ft to reach the lip of the plateau and a refuge.

Setting off in the dawn I made good time and was path-finding up Gamila herself (8192ft) well ahead of schedule. Reaching the summit, cloud patches were pouring over the edge, but I glimpsed some of the spectacular view through the veil of weather and snapped a few scenics, however I’d forgotten to pack any gloves and at that height, even in Greece I began to lose feeling in my fingers in the wind chill. Fortunately I’d thought to bring a spare pair of thick socks, but whilst Rohan socks might be very warm, they’re not very dexterous and the camera took a little tumble as I tried for a few more images of the surrounding rocky crags. As it bounced to within 2 m of the edge, I ran over to see that the lens cap was completely smashed in, and my heart, which was already crashing around in my rib cage, hit overdrive - but the glass itself was untouched and I thankfully stuffed it into my rucksack.

As I’d made such good time I eyed up the peak of Astraka summit behind me, cloud had been rolling on and off it all morning and I fancied I could be lucky with a break and another incredible view from the top. Making my way around the southern end of the rock face to begin a less steep ascent, the cloud really became pea-soup thick and I decided it wasn’t going to be possible and turned around, as I did, an ominous rumble of thunder reverberated off the hill side. There are times when the gravity of the situation immediately hits you full in the face, and other times when you look back in retrospect and consider your actions.

I was happily in the latter camp, even when the rain came sheeting down and the vis dropped to about 20m. I could just about see the occasional trail marker (a cairn of stones on the ground) and I was dressed in my full waterproofs including my first wear of dry explorers trousers (you know, the ones that are like normal walking trousers but say they are fully waterproof) and the thought crossed my mind that it would be an interesting test. This thought quickly fled my mind as lightning started to hit the ground and I was faced with my reality of being a very exposed human amongst rock, short grass and nothing else. So I legged it. Downwards. I trail run a little bit and I’m pretty sure I logged a sub 8 minute mile in full walking kit. The rain was very rapidly turning the landscape into either a river or an island, the markers were submerged but the visibility increased and with a few compass bearings I found myself dripping wet under the porch of the refuge at the lip of the plateau.

A more rigorous test than I’d imagined, I was warm and dry and the trousers hadn’t protested at their sudden action packed decent nor ripped or stretched as I’d bolted down the abrasive rocky gullies. After some coffee, the storm blew past and I headed straight up the side of Astraka, only for the fog to blow in again halfway up to the summit and deny me a view, but I made it this time and despite being forced into another long decent I’d not planned, made it back to the village with an hour of daylight to spare and a huge sense of having had an adventure. 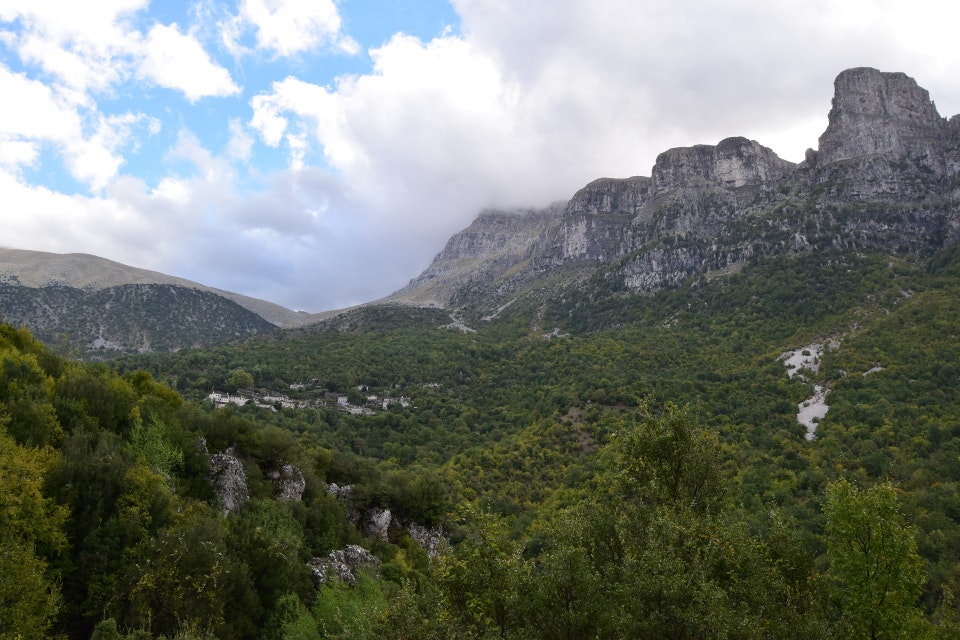