Our trip to Indonesia in November 2013 started in the Borneo area. My wife has become increasingly adventurous searching the internet for our holiday break. For her the departure is the culmination of six months work, for me it is often a voyage to the unknown. In 2013 our trip to Indonesia surprised both of us with the intensity of the experience.

We planned to go to Borneo to see orangutans and had decided to visit Tanjung Puting National Park. It can be done in a couple of days but we decided to stay on a river boat for two nights as well so that we could visit more of the viewing points. Sleeping on deck, living out of a rucksack in the jungle we loved every bit of it, though some of the insects gave me a fright.

Our last night in Borneo was billed as a visit to a native village which conjured up images of traditional markets, local crafts and a bit of dancing. It was not like that. Two hours on a tiny speedboat then six hours in a 4WD to the middle of nowhere left even our guide a bit lost. He eventually tracked down the headman of the Dayak village who had been called away and we set off to find him. He was at a funeral in another village to which we were also duly invited.

We witnessed, indeed participated in the musical celebration of the passing of a spirit to the world beyond, accompanied by large amounts of rice wine.

We returned to a long house in our village for supper, another musical interlude and some well earned but hard to find sleep. Even this guest house had no water, no toilets and no bedding but it was comfortable enough for several of the musicians to stay the night with us. A mossie net dealt with the flying stuff and a cat took care of the rest.

Rising early we readily agreed to a trek in the jungle and managed to pick up 7 guides. They took us miles into the forest and the most poignant part of the trip. For all the efforts this village was making to encourage tourism they vehemently denied the extension of the palm oil development to their “protected” region. Nevertheless we travelled part of the way on a newly bulldozed strip into virgin jungle and later saw queues of palm oil tankers making their way down the main road which intersected every mile or two with another new jungle trail. Though we were 8 hours from the animal habitat we had so much enjoyed a day or two before the scale of this development was enormous and probably illicit, judging by the denials.

Packing for these trips is an art – washable lightweight and suitable for occasional luxury as well - and we usually plan on throwing away some older items after the more adventurous days. In Borneo I had only a pair of Rohan travel bags for the village trip and they had already had two days on the boat. They shrugged off the sweat, mud and blood from the leech bites and were back in use again after a wash back in civilisation. Unfortunately we had left our leech socks behind after 3 days of orangutan watching where they were quite unnecessary – lesson learned the hard way. 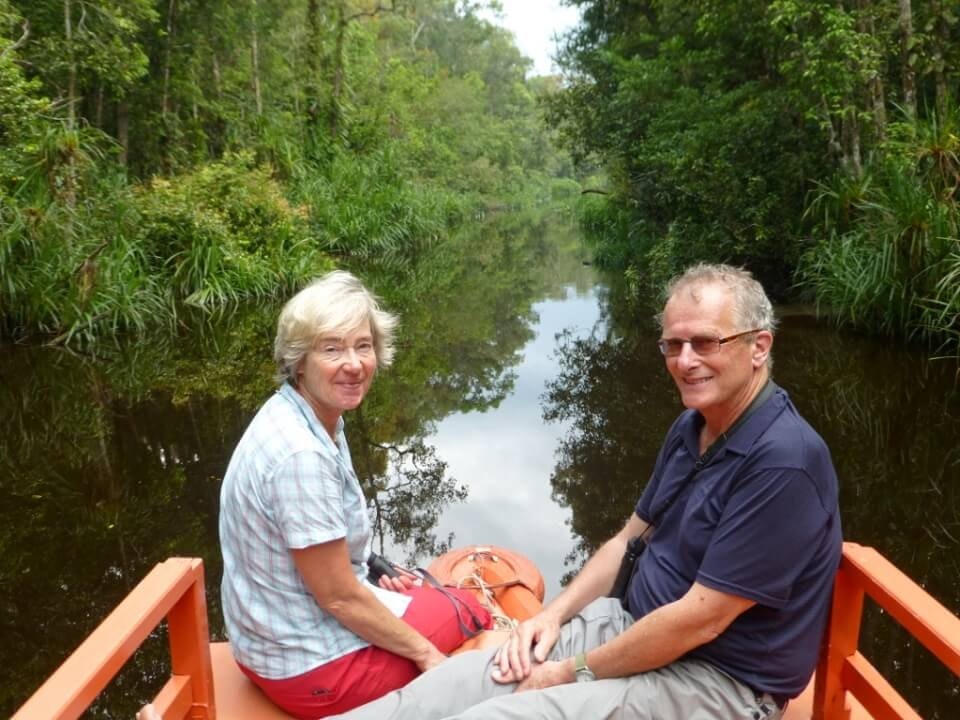