In November 2015 we travelled from the Cape of Good Hope to Victoria Falls. Our transport for this 5500km trip was a converted Toyota truck which resembled a fire engine with large windows. We christened her ‘’Priscilla Queen of the Desert’’ and wrote her name large, with moistened finger, in the dust of the Namib Desert that clung to her red paintwork.

Space was limited, and we were allowed one bag per person for the six of us on board, not to exceed 10kg in weight. Not a problem. My Rohan gear for the whole trip  weighed in at less than that. It got hot, very hot, as we travelled north through South Africa and into Namibia and along the Skeleton Coast.

No rain has fallen to give respite to this area for several years causing severe drought.

My ‘On Route’ shirt, worn wet, cooled me as it dried. However, my ‘Elite’ waterproof seemed an extravagance I need not have packed, as each golden sunset was followed by an impossibly starry night, which in turn heralded another cloudless blue dawn. Leaving the wonders of Etosha National Park, Priscilla took us into Botswana and through the Kalahari Desert only getting bogged down to her axles in the sand once, as we headed for one of the highlights of the trip, the Okavango Delta.

Here we were to be transported in the local ‘mokoro’ dugout canoes to a campsite on an island in the delta, and space was even more limited in these craft. One small 35 litre rucksack was all we were permitted to carry. Once again Rohan pack-ability was ace. As this was the beginning of the rainy season I pondered whether to pack my Elite waterproof. No use so far, but being an advocate of ‘’Murphy’s Law’’ I stuffed it into the bottom of my pack.

The delta was magic and three days here was not long enough.  Striking camp to return in the mokoro dugouts, one ominous black cloud hovered nearby and a few large drops of rain broke the mirrored surface of the water. Wanting to keep my camera handy, but dry, I remembered my unused waterproof and wrapped my camera up in it, tied securely about by the arms. We were the first to be poled out into the narrow reed lined channels, which gave way periodically to open water where hippo’s watched us go by.

Then it hit us! As we broke out of a channel we startled a hippo grazing in the reeds.

The animal ‘dived’ into the water no more than 10m from us.

Many tons of displaced water sent a wave in our direction that would have not looked out of place on Hawaii’s North Shore. We see-sawed to port, to starboard, to overboard, me clutching my camera, and came up waist deep and worried. I was wet. My bag was wet. The mokoro was very wet. My camera…. was dry!! 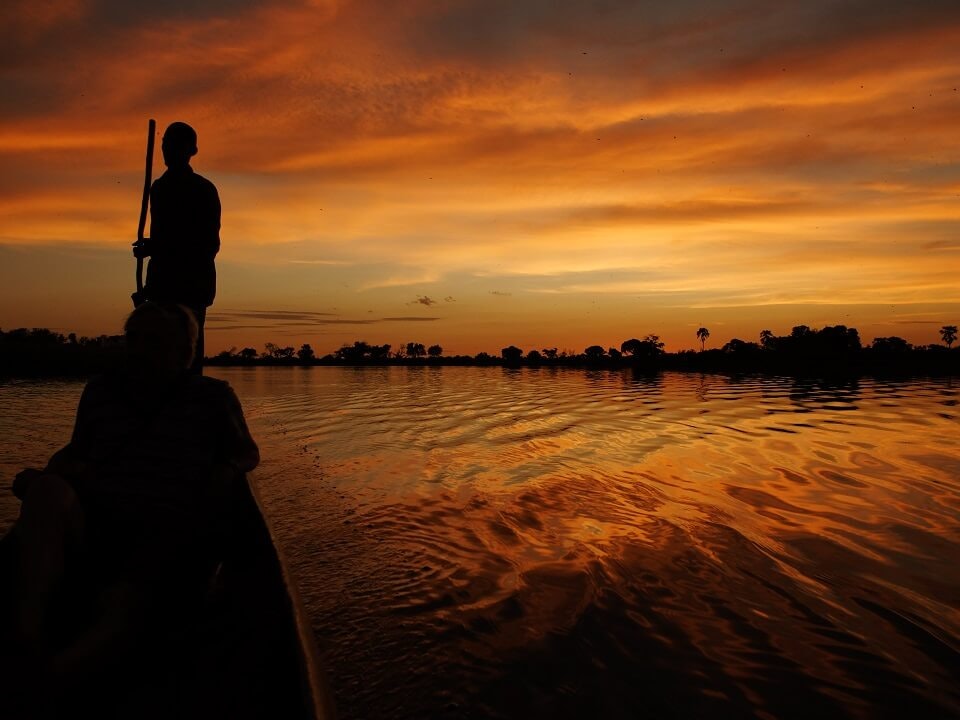